The term ”data quality” exists in many different languages.

In other Germanic languages the words for data quality are close to datakvalitet. In German: Datenqualität. In Dutch: Datakwaliteit.

The above terms are compound words. Even though English is also classified as a Germanic language we see a Latin influence as “data quality” is two words in English. And that goes for all English variants. It is only when it comes to if we have to standardise this or standardize that we are in trouble. British English is best when we have to select if data quality improvement is a program or a programme.

And then there are of course terms in other alphabets than latin and other script systems: 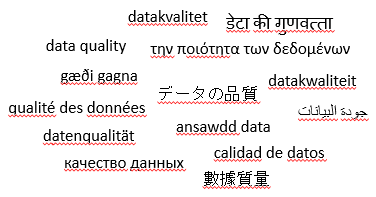