When passing the results of data cleansing activities back to source systems I have often encountered what one might call broken links, which have called for designing data flows that doesn’t go by book, doesn’t match the first picture of the real world and eventually prompts last minute alternate ways of doing things.

I have had the same experience when passing some real (and not real) world bridges lately.

The Trembling Lady: An Unsound Bridge 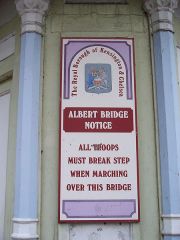 When walking around in London a sign on the Albert Bridge caught my eye. The sign instructs troops to break steps when marching over.

In researching the Albert Bridge on Wikipedia I learned that the bridge has an unsound construction that makes it vibrate not at least when a bunch of troops marches across in rhythm. The bridge has therefore got the nickname “The Trembling Lady”.

It’s an old sign. The bridge is an old bridge. But it’s still standing.

The same way we often have to deal with old systems running on unstable databases with unsound data models. That’s life. Though it’s not the way we want to see it, we most break the rhythm of else perfectly cleansed data as discussed in the post Storing a Single Version of the Truth.

The Øresund Bridge: The Sound Link

The sound between the city of Malmö in Sweden and København (Copenhagen) in Denmark can be crossed by the Øresund Bridge. If looking at a satellite picture you may conclude that the bridge isn’t finished. That’s because a part of the link is in fact an undersea tunnel as told in the post Geocoding from 100 Feet Under.

Your first image about what can be done and what can’t be done isn’t always the way of the world. Dig into some more sources, find some more charts and you may find a way.

However, life isn’t always easy. Sometimes charts and maps can be deceiving.

Wodna: The Sound of Silence.

As reported in the post Troubled Bridge over Water I planned a cycling trip last summer. The route would take us across the Polish river Świna by a bridge I found on Google Maps.

When, after a hard day’s ride in the saddle, we reached the river, the bridge wasn’t there. We had to take a ferry across the river instead.

I maybe should have known. The bridge on the map was named Wodna. That is Polish for (something with) water.