Among the recurring sessions year by year on this conference and the sister conferences around the world will be Aaron Zornes presenting the top MDM Vendors as he (that is the MDM Institute) sees it and the top System Integrators as well.

Managing an ongoing list of such entities can be hard and doing it in PowerPoint does not make the task easier as visualized in two different shots captured via Twitter as seen below around the Top 19 to 22 European MDM / DG System Integrators: 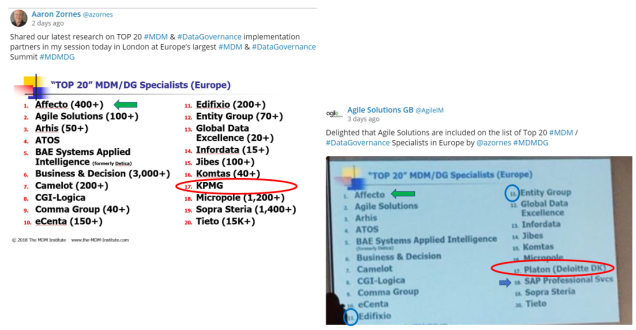 Now, the variations between these two versions of the truth and the real world are (at least):

PS: Recently I started a disruptive list of MDM vendors maintained by the vendors themselves. Perhaps the analysts can be helped by a similar list for System Integrators?