The London 2012 Olympic Games is approaching. You feel that very well in London. For example my usual walking path thru Hyde Park is closed because of the upcoming sport event.

I’m sure these games are going to produce some great moments. Some of the moments I’m remembering from previous games have a touch of data quality technology learning attached.

In 1968 the American athlete Dick Fosbury introduced a better way of doing the high jump. What I find interesting about the Fosbury Flop is that this technique hasn’t always been possible. In the old days the jumpers landed in a sandpit. If you did the flop then, it would certainly be a flop most probably getting you injured after the first attempt. But after deep foam matting was put in place, the flop has been a good choice.

It’s the same with data quality technology. Some techniques for improvement you have found to be a flop previously may because of new circumstances be a good choice today. The high esteemed scissors jump didn’t prevail forever.

In 1988, at the winter event, a Brit made a lot of headlines by being totally bad at ski jumping. Eddie the Eagle finished not surprisingly far behind natural born Finnish, Norwegian and Czech ski jumpers coming from a country where the first sign of the white fluffy stuff from above isn’t considered a severe weather condition. But Eddie set a new British record.

It’s the same with data quality technology. Some tools and services are leading in some countries, but have a hard time when challenged internationally. 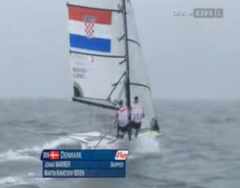 In the 2008 games something spectacular happened in the sailing competitions. The Danish 49er boat was in first place but broke the mast when leaving the harbor for the last race. The Croatian team offered their boat. The Danes sailed into the race long after the other boats have started, but managed to get a result just good enough to secure the gold. The other teams might have been confused by the wrong flag.

As told in the post Most Times the Home Team Wins flags are important – in sports, in data quality and other data management disciplines too.

What do you guess will make a difference in this year’s Olympic Games? – And in Data Quality improvement?