Spam mails can be great food for thought.

This morning I had this one in one of my many mailboxes:

So, the amount in question was:

It’s interesting to see how the spammer used points and commas in the large amount of money he wanted to trick me with. Don’t know if he was sloppy or had the problem of showing an amount to a not segmented audience of the world that are:

The use of a sign for decimal mark and thousand separators is indeed divided across the globe as seen on this map: 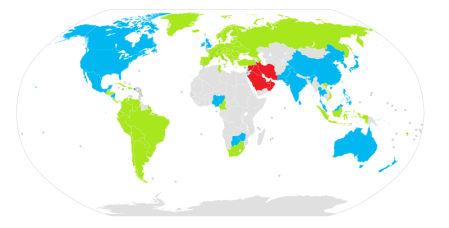 The blue countries are using point as decimal mark and comma as thousand separator and the green countries are doing the opposite.

Then there may be diversities within a country as in Canada there are always questions about Quebec, where they are following the French custom. India also has its own numerals with 100 groupings besides the English heritage.

The pattern of a approximately one half world using one standard and approximately another half of the world using an opposite standard is seen in other notations as arranging person names, writing street addresses as well as place names and postal codes as told in the post Having the Right Element to the Left.

9 thoughts on “Your Point, My Comma”