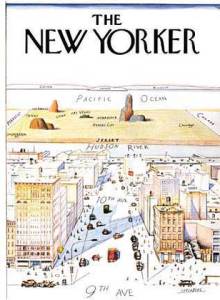 There is a famous poster called The New Yorker. This poster perfectly illustrates the centricity we often have about the town, region or country we live in.

The same phenomenon is often seen in data management as told in the post Foreign Affaires.

In Denmark where I am born and raised and has worked most of my life we have two ways of expressing an address:

But around 3.5 percent of Danes, including yours truly, has a foreign address. And until now the way of registering and storing those addresses in the public sector and elsewhere has been totally random.

This is going to change. The public authorities has, with a little help from yours truly, made the first standard and governance principles for foreign addresses as seen in this document (in Danish).

At iDQ A/S we have simultaneously developed Master Data Management (MDM) services that helps utility companies, financial services and other industries in getting foreign addresses right as well.